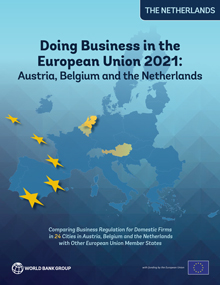 Doing Business in the European Union 2021: The Netherlands

Doing Business in the European Union 2021: Austria, Belgium and the Netherlands assesses the regulatory environment for businesses and its impact on local entrepreneurs in 7 cities in Austria (Bregenz, Graz, Innsbruck, Klagenfurt, Linz, Salzburg and Vienna), 7 cities in Belgium (Antwerp, Bruges, Brussels, Charleroi, Ghent, Liège and Namur) and 10 cities in the Netherlands (Amsterdam, Arnhem, Eindhoven, Enschede, Groningen, The Hague, Maastricht, Middelburg, Rotterdam and Utrecht). The study measures regulations relevant to five stages in the life of a small to medium-size domestic firm: starting a business, dealing with construction permits, getting electricity, registering property, and enforcing contracts. In each of these areas, the study highlights good practices that can be leveraged to empower local entrepreneurs and firms.

Doing Business in the European Union is a series of subnational studies requested and funded by the European Commission, Directorate-General for Regional and Urban Policy, and produced by the World Bank Group. Previous editions, covering cities from Bulgaria, Croatia, the Czech Republic, Greece, Hungary, Ireland, Italy, Portugal, Romania, and Slovakia, were released in 2017-2019.

Where is it easier to do business in Netherlands?

Note: Data for Amsterdam, as well as for comparator economies and regional averages, are not considered official until published in the Doing Business 2021 report.

How would a location's ranking change if it reformed? See the impact of reforms by using the ranking simulator for the Netherlands (Excel, 21KB) to change indicator values. This exercise assumes that other cities do not reform.

View brief summary of business reforms recorded at the national level by the global Doing Business in Netherlands in recent years.

See who contributed to the subnational report in the Doing Business in the European Union 2021: The Netherlands.